But then I started hearing more about these Turmeric Lattes and I knew I had to try one. So my first one, was from a Raw food bar, call Revitasize in Toronto. It was DREAMY. They make their own Cashew Milk so it was raw and as pure as you can get.

I knew I could duplicate it at home, despite not having my own raw Cashew Milk, but we had Almond Milk, so I knew that could still do the trick.

If you guys don’t know much about the benefits of Turmeric, here’s a quick tutorial:

Turmeric is famous for its ability to decrease inflammation in the body, but this unique spice also has the ability to improve brain functioning, lower the risk of brain and heart diseases, and to alleviate arthritis. Turmeric’s powerful antioxidant ability also has been know to help prevent certain types of cancer.

**There are countless studies that reference this - but I by NO MEANS am suggesting it’s a cure or can prevent all cancers.** 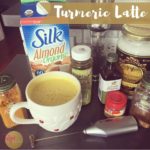 Definitely research for yourself, the benefits of this amazing superfood, as when you combine it with others superfood ingredients, also referred to as GOLDEN MILK, this feisty drink takes things up a notch with its anti-inflammatory and digestion-boosting powerhouse of ingredients! It’s packed with healthy fats and a whole lot of nourishment.

I can see the need to be adding into my daily routine - and with 8 oz of Almond Milk now being equivalent to 1 tsp on the Portion Fix plan, I’m all in. And I will also preserve my other teaspoon for the added coconut oil.

To make your latte, simply add the ingredients to a small saucepan. As you bring it to a boil, whisk the ingredients together. Once it’s boiling, turn off the burner, transfer it to a mug and I highly suggest you FROTH it for exact pizzazz! :)

Ok, give it a try and let me know what you think and any changes you make to it!

There are no comments yet. Be the first one to leave a comment!